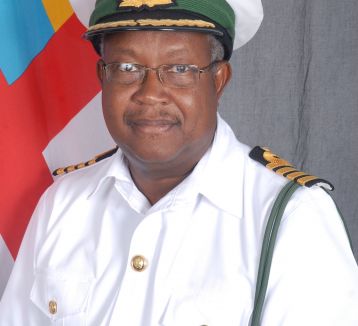 Captain Sawyer was born on August 12, 1955 in the settlement of Palmetto Point on the Bahamian island of Eleuthera. His high school education took place at St. Anne’s High School in Nassau, He then went on to study to become a Mechanical Engineering Technician at C.R. Walker Technical College from 1972 to 1973.

In September 1973, Captain Sawyer worked at BaTelCo in Nassau and Exuma, where he was employed as a telecommunications technician, qualifying through City and Guilds of London. In May 1977 he started working at NCR Corporation as a field service representative, servicing and installing business machines and other electronic equipment. While Captain Sawyer was employed at NCR, he completed courses in Daytona, Ohio at NCR’s headquarters and served as the only field service representative in Freeport, Grand Bahamas. He returned to BaTelCo in February 1979 and was stationed in Rock Sound, Eleuthera.

In 1981, Captain Sawyer joined the Royal Bahamas Defence Force – the place where he would spend the rest of his career steadily moving up the ranks. In January 1881, he attended Britannia Royal Naval College in Dartmouth, England and successfully completed the International Midshipman’s course in December 1981. He was promoted to Acting Sub-Lieutenant on April 1st 1982, from March to November 1982 he served as Navigation Officer on HMBS Eleuthera and a Deck Officer on HMBS Marlin.

His education also continued while on the RBDF, Captain Sawyer attended the Naval Staff College of the Naval War College in Newport, Rhode Island, from January to June 2000 and the Centre for Hemispheric Defense Studies at the national Defence University in Washington, D.C from January to February 2004. He also completed studies at the National Defense College’s International Intelligence Fellows Program in Washington, D.C. in March 2009. Captain Sawyer’s most recent course, in Comprehensive Crisis Management, was in Honolulu, Hawaii from August to September 2009 at the Asia Pacific Center for Security Studies.