Recently, the United States Coast Guard Cutter (USCGC) EAGLE paid The Bahamas a visit. This being only one stop of many on their schedule during their 2015 training program.

Built in 1936, the Eagle was originally used by Nazi Germany to train their naval cadets. However, the ship was taken by the United States during World War II as a war prize, recommissioned and ironically is still being used for the training of American cadets and officer candidates. The training program provides the Coast Guard Academy cadets and Officer Candidates with knowledge and practical skills in seamanship, navigation and engineering.

To date, the Eagle is the largest tall ship flying the United States ensign and has also contributed to the development of the Royal Bahamas Defence Force with Midshipman Darius Adams who is currently training onboard the Eagle}

The Royal Bahamas Defence Force in a collaborative effort with the United States Embassy awarded Midshipman Darius Adams with a four year scholarship to complete an undergraduate program at the United States Coast Guard Academy in New London, Connecticut. This would mark as the second time within seventeen years a member of the Royal Bahamas Defence Force was awarded with a four year scholarship at the Academy. Midshipman Adams competed among over thirty applicants during the recruitment process for the scholarship opportunity. Overall, he exemplified the most aptitude and physical ability, which has afforded him the honor to enroll at the prestigious Academy. During the Midshipman’s tenure in the Bachelor’s program, he will undergo training in Electrical Engineering with a minor in Computer Science. Upon his successful completion of study, the Midshipman will return to the Defence Force advancing to the rank of Sub Lieutenant. 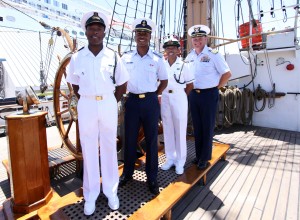