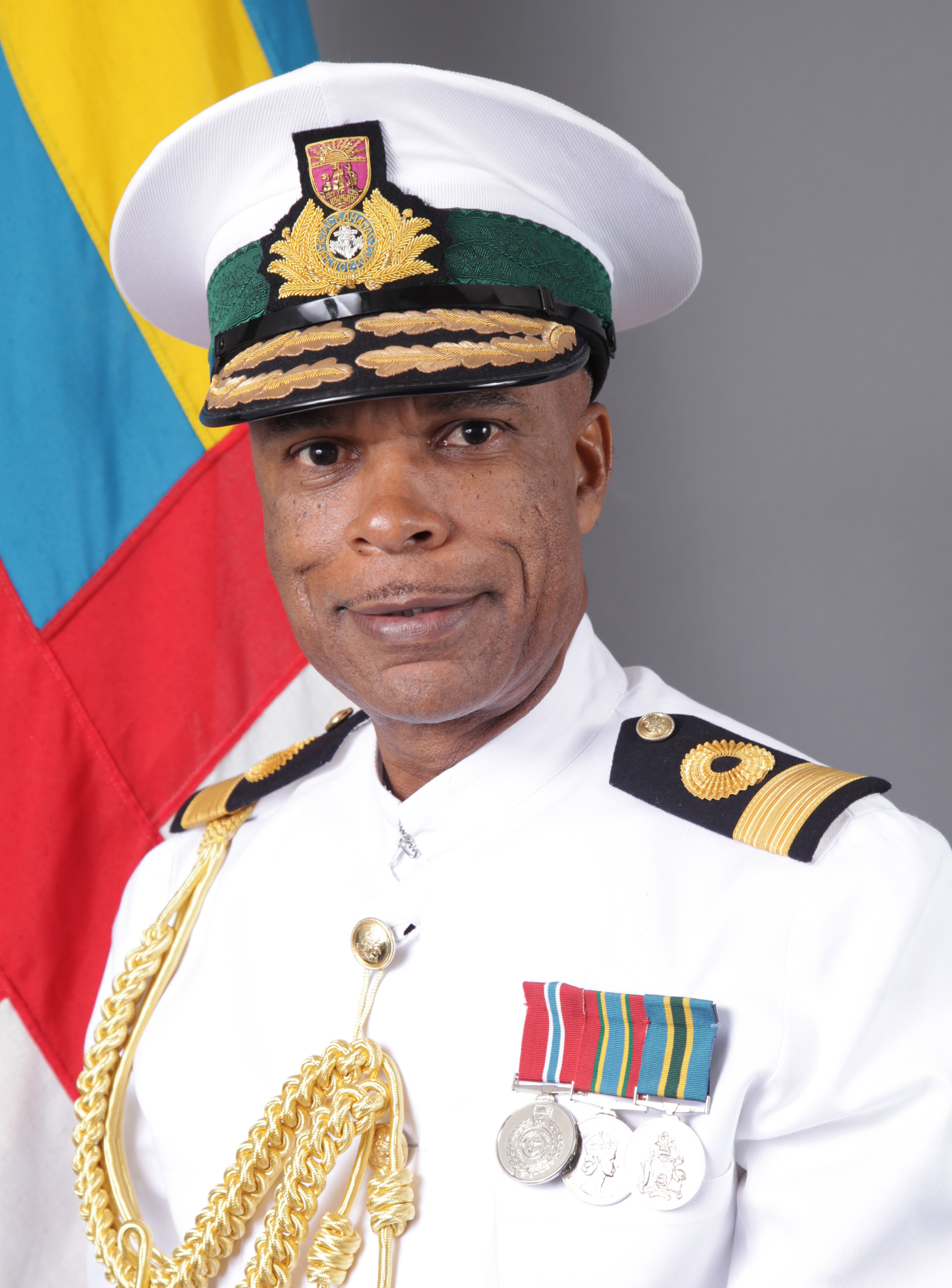 Upon recommendation by the first Commander Defence Force (Commodore William Swinley), Commodore Bethel was awarded a scholarship by the Ministry of Defence (now Ministry of National Security) to undergo his initial naval officer training at the Britannia Royal Naval College (BRNC) in Devon, England in January, 1981. Prior to undergoing naval training, Commodore Bethel worked as a bellboy aboard a leading Florida-based cruise ship (S/S Emerald Seas) and was later employed as an operations clerk at one of the world’s largest shipping company (Navios Shipping Company), and then as a courier at Bahamas Island Couriers (now Federal Express).

Upon graduating from naval college, Commodore Bethel was appointed to various positions aboard Defence Force patrol craft, as well as at Coral Harbour Base and Defence Headquarters. His early appointments as a junior officer included that of navigating, executive and commanding officer aboard various patrol vessels in the seagoing Squadron Department where he was actively involved with anti–narcotics, migrant and poaching operations during the 1980s. As a young officer, Commodore Bethel also held positions ashore at Coral Harbour Base as Deputy Supply and Personnel Officer and at Defence Headquarters as Recruiting and Personnel Officer, and Assistant Staff Officer to Commodore Leon Smith, the first Bahamian Commander Defence Force.

In late 1991, Commodore Bethel resigned from the Defence Force and later rejoined in 1996. Upon rejoining the Defence Force, he was appointed Assistant Training Officer in the Training Department. Shortly thereafter, he was reassigned to Defence Headquarters. His appointments at Defence Headquarters included Research and Planning Officer, Public Relations Officer and Chief Staff Officer to Commander Defence Force (Commodore Davy Rolle). In 1998, Commodore Bethel was appointed Executive Officer of the newly built Bahama Class vessel, Her Majesty’s Bahamian Ship NASSAU. He later headed the Defence Force’s Training Department where he and his staff were instrumental in transforming the Defence Force’s training program into specialized training schools (including the School of Leadership).

Other appointments held thereafter included that of commanding officer of the Defence Force’s Commando Squadron, and commanding officer of the Defence Force’s 200-foot flagship vessel, HMBS BAHAMAS, in 2006. During the latter appointment, Commodore Bethel and his ship’s company were responsible for initiating extended patrols from Freeport, Grand Bahama, as part of the Defence Force’s regional command program where they were successful in apprehending foreign poaching and migrant smuggling vessels. Commodore Bethel and his ship’s company also assisted The Bahamas National Geographic Information Systems Center with delineating The Bahamas’ maritime boundaries during this period. In 2009, he was appointed by Commodore Clifford Scavella to head the newly established post of Force Inspectorate Officer where he reviewed and proposed recommendations for the modernization of the Defence Force. Later, in December 2009, Commodore Bethel completed a three-month overseas assignment in the Republic of Trinidad and Tobago where he served overseas as the Operations, Planning and Coordinating Staff Officer (with responsibility for maritime security) for the Commonwealth Heads of Government Meeting in 2009 that was attended by over 40 heads of states.

In 2010, Commodore Bethel became the coordinator of the Defence Force’s HIV/AIDS awareness and educational programs. In 2012, he represented The Bahamas as a member of the United Nations Office on Drugs and Crime’s very first expert group meeting on Combating Transnational Organized Crime Committed at Sea in Vienna, Austria. He was also a member of the Government’s Sandy Bottom patrol craft acquisition and base development technical team that engaged in initial discussions for construction of proposed Defence Force patrol craft and bases with Damen Shipbuilders and Van Oord Dredging company in the Netherlands in 2012.

In 2013, Commodore Bethel coordinated the Defence Force’s Military Assistance to Civilian Authority program for the deployment of 150 Defence Force personnel to various Government agencies to assist the Royal Bahamas Police Force with enhancing safety and security of Bahamian communities. Defence Force personnel were also assigned to the Government’s Urban Renewal Program throughout various communities in New Providence. In May 2014, Commodore Bethel coordinated the Defence Force’s involvement with providing security for the first International Association of Athletics Federations World Relays at the Thomas A. Robinson Stadium in New Providence.

In March 2015, Commodore Bethel became the first officer in the Defence Force to be appointed as ‘Acting’ Commander Defence Force upon the retirement of Commodore Bowe. As Commander Defence Force (Acting), Commodore Bethel was responsible for overseeing a significant reduction of foreign poaching in the Great Bahama Bank area through its 24/7 patrol program in the southern Bahamas; redeployment of Defence Force surveillance aircraft operations out of Great Inagua; coordination of extensive disaster relief and recovery efforts in the Family Islands in the wake of Hurricanes Joaquin (2015) and Matthew (2016); the development of The Bahamas Customs and Excise Department’s Marine Unit Division; the introduction of Operation Secure Shores (a coastal security program for New Providence) resulting in crime reduction in the south of the Island; the continuation of the Defence Force’s decentralization program for the development of bases in the northern, central and southern Bahamas; the introduction of joint operations with the Royal Bahamas Police Force in the fight against serious crime on the streets of New Providence; and rendering of assistance for extinguishing of a major fire at the City Dump and the evacuation of residents in the neighboring communities.
.
Academically, Commodore Bethel is a graduate of St. John’s College secondary high school in Nassau, Bahamas and has a Master of Arts degree in Leading, Innovation and Change (MALIC) from York St. John University in York, England with residency in Switzerland. He has completed a number of professional studies at renowned military institutions in the United Kingdom and the United States. He is a graduate of the Britannia Royal Naval College, Devon, England. Additionally, he is a graduate (with distinction) of the United States Naval War College’s Naval Staff School in Rhode Island. Commodore Bethel is a Fellow of the Center for Hemispheric Defense Studies at the University of National Defense, in Washington, D.C. and a fellow of the Asia-Pacific Center for Security Studies in Hawaii.

He has also participated in a number of civil-defence management courses and seminars hosted by various institutions and organizations in The Bahamas, the United States, United Kingdom, Australia and the Caribbean region. Other courses/institutions attended include: the Defense Resource Management Course at the Center for Hemispheric Defense Studies (CHDS) at the National Defense University in Washington; the Prospective Commanding/Executive Officers Course at the United States Coast Guard Academy’s Leadership Development Center in Connecticut; the Counter-Terrorism Course at the Asia-Pacific Center for Security Studies (APCSS) in Hawaii; the Junior Supply Managers Course at the Royal Navy Supply School in Cornwall, England; the Changing face of Peacekeeping Course at Canada’s Pearson Peacekeeping Institute (hosted in Jamaica); and the National Defense University of the Republic of China.

His involvement with civil affairs includes serving as a member of the historic Commonwealth Heads of Government Meeting’s Secretariat in Nassau in 1985, which hosted the Nassau Accord. He was also a member of the Bahamas Maritime Authority’s committee for the establishment of The Bahamas Maritime Cadet Corps (BMCC) program for hundreds of high school students in 2004. Commodore Bethel has since helped to coordinate the introduction of the BMCC program for students at the Bahamas L.E.A.D. Institute for the development of at-risk young men, and had facilitated the technical exchange program between the Defence Force and LJM Maritime Academy.

Commodore Bethel is a member of the board of directors for the Bahamas Maritime Training Institute, which has responsibility for training and preparing mariners to meet basic entry requirements for employment aboard commercial vessels. In 2010, he laid out the strategic framework for the transformation of the Defence Force’s Ranger’s youth program into the Rangers National Youth Service program. In 2013, Captain Bethel coordinated the Defence Force’s participation in the Antiquities, Monuments and Museum’s Corporation’s historic reenactment of the Changing of the Guard at Fort Charlotte, which now employs former members of the Rangers program.

In 2014, 2015 and 2016, he served as the Commodore of the 5th, 6th and 7th Annual Sir Durward Knowles Festival of Lights Christmas Boat Parades in Nassau, Bahamas. In July 2014, he introduced and organized the breaking of the Guinness World Record for ‘the most persons blowing conch shells simultaneously’ during The Bahamas’ 41st Annual Independence Grand Celebration. The history-making event represented a ‘call for peace from the islands of The Bahamas to the nations of the world’ in keeping with the Independence theme: Celebrating Culture: A Commitment to Peace.

In 2017, he relaunched the Annual Commander Defence Force Regatta after an 8-year break. The event was hailed as having one of the ‘largest Regatta crowds’ at that venue during which time the Minister with responsibility for National Regattas (the Hon. Alfred Gray) announced that the post of Commander Defence Force will also be the Honorary Commodore of National Regattas. Also in March 2017, Commodore Bethel launched the Ambassador of Peace program—a nationwide program designed to encourage Bahamians from all walks of life to engage in random acts of kindness for the promotion of peace throughout The Bahamas. He is also the coordinator of the Lucayan Sea project—a program for the promotion of naming the waters of The Bahamas, the Lucayan Sea, as a symbol of peace and as a tribute to the peaceful Lucayans, the original inhabitants of The Bahamas, who were also the first to suffer total genocide at the beginning of a modern era within the Americas.

Literary works by Commodore Bethel include the internationally published researched-article entitled, “Caribbean Narcotics Trafficking: What is to be done?” (DISAM Journal, Fall 2002/Winter 2003) which proposes the incremental replication of Operation Bahamas, Turks and Caicos (OPBAT) counter-narcotics model within the Caribbean region. He is also the author of the book entitled, America—A Destiny Unveiled that features the significance of The Bahamas’ historic and spiritual heritage, and its impact on the destiny of the United States of America. His book, The Lucayan Sea: Birthplace of the Modern Americas, proposes an identity, purpose and destiny for the people of The Bahamas and the Turks and Caicos Islands. He and his wife, Teri Bethel, co-authored the children’s adventure story book, Trapped On Kooky Island, and he is the author of The Lucayan Story—The Indigenous People of The Bahamas and the Turks and Caicos Islands.
.
Awards received by Commodore Bethel include the Defence Force’s Meritorious Medal, the Distinguished Medal, the Long Service and Good Conduct Medal, and a Commander Defence Force’s Commendation. He is also a recipient of the Real Men Ministry’s 40th Anniversary National Men’s Award for ‘invaluable contribution towards the advancement and development of The Bahamas in the category of military and national development.’

Commodore Bethel is a certified scuba diver, a licensed private and ultralight aircraft pilot, and a former student skydiver. In his private time, he enjoys jogging, adventure travel, conceptual art, writing and speaking on the topics of character and leadership development, and The Bahamas’ unique heritage. He is married to Teri (née Knowles), and the couple has two sons.