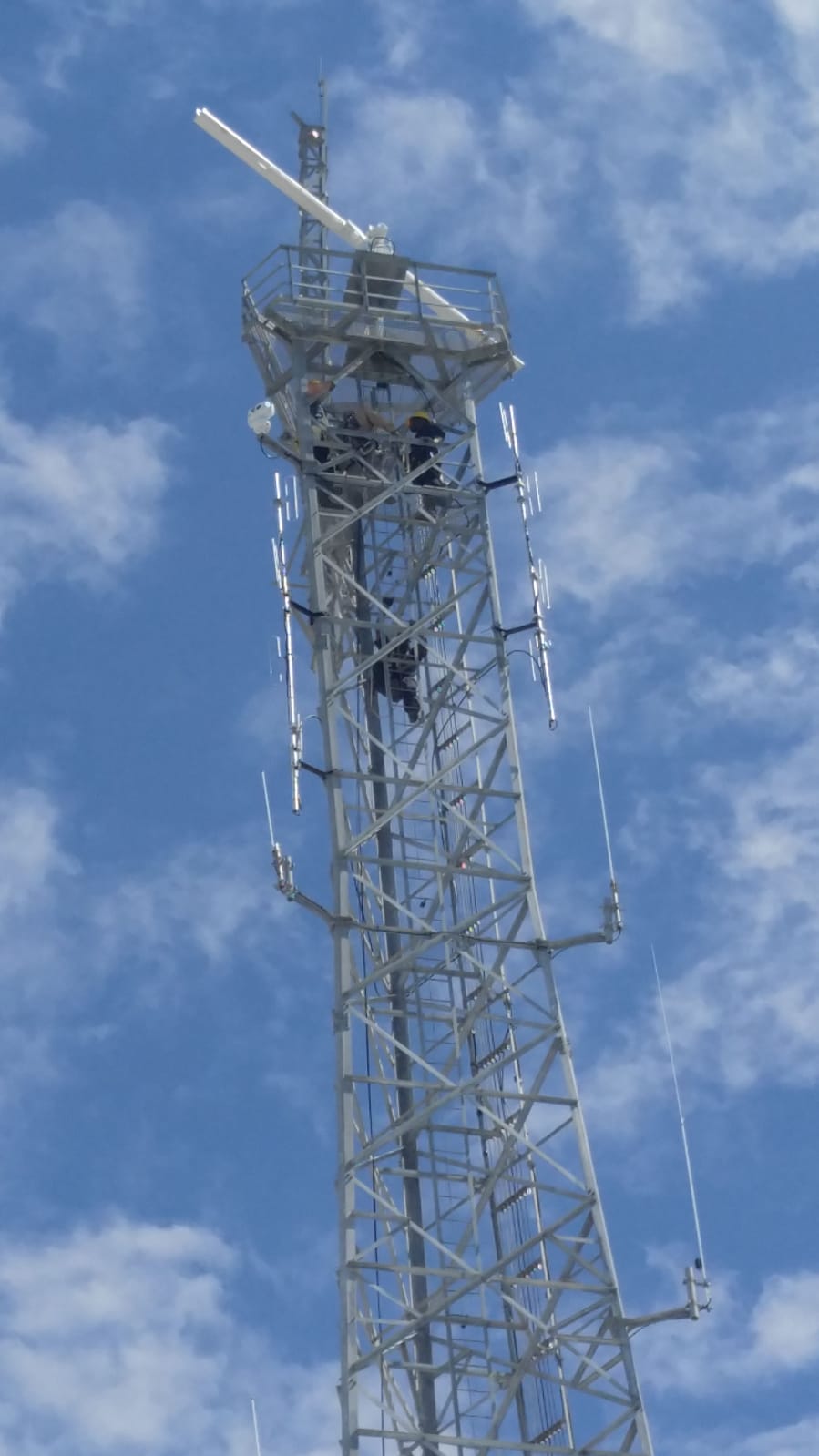 Coral Harbour Base, 22 APR. ‘19 (RBDF): The Bahamas Government acknowledged what it anticipates will be a significant boost for the Royal Bahamas Defence Force and the country in the fight against illicit activities with the handover of a long range coastal radar to The Bahamas by the United States Government.
The radar was installed at the Royal Bahamas Defence Force Base in Inagua. The significant milestone was marked by an official handover ceremony hosted by the Defence Force and attended by senior Government officials from The Bahamas and the United States. Included among officials from The Bahamas were the Most Honourable Dr. Hubert Minnis, the Prime Minister of the Commonwealth of The Bahamas, the Deputy Prime Minister, the Honourable Peter Turnquest, the Minister of National Security, the Honourable Marvin Dames, other Cabinet ministers, Parliamentarians and other Government officials, the Commissioner of Police, Mr. Anthony Ferguson, and the Commander Defence Force, Commodore Tellis Bethel, and other Heads of Law Enforcement agencies and special invited guests.
Among the attendees from the United States were the Chargé d’Affairs, Ms. Stephanie Bowers, at the United States Embassy in Nassau, along with General Terrance O’Shaughnessy, Commander of the United States North American Aerospace Defence Command and Northern Command and his delegation.
This initiative was a welcomed one by The Bahamas Government. The long range coastal radar will maximize the Defence Force’s capabilities to detect, deter, and apprehend persons engaged in illicit activities in the southern Bahamas. It also has the ability to transmit radar signals to the Defence Force’s Operations Command Center at the main Coral Harbour Base approximately 350 miles away.
In his remarks, Prime Minister Minnis lauded the continued partnership between the United States and The Commonwealth of The Bahamas, which has resulted in this historic milestone.
“Today’s handover commissioning ceremony is another important step in the governments strategy to strengthen the borders of The Bahamas to better address the illegal imigration, illicit drugs, gun trafficking, poaching, human trafficking and other threats to our national security,” said Prime Minister Minnis. “This state of the art Kelvin Hughes Long Range Coastal Radar, valued at over 2 million dollars was made available to The Bahamas by the government of the United States of America through the US embassy in The Bahamas.”
U.S. Chargé d’Affairs, Ms. Bowers noted that this significant achievement is a boost against illicit activities in the country. She stated:
“This will only only serve to expand our long standing partnership to counter transnational criminal organizations. Operation Bahamas, Turks and Caicos has been tremendously successful since its inception in 1982, yet there is still work to be done.”
In his remarks, the Honourable Marvin Dames said that: “The Bahamas Government has also recently approved funding for the implementation of a Multi-Agency Drone Program, which will be another dimension of this multi-layered security approach.” Minister Dames also stated “The decentralization of Defence Force Operations involves the development of bases at strategic locations for the sustaining of security operations and humanitarian assistance throughout our archipelago.”
Valued at a cost of over two million dollars, this is the first of several radars that will be erected. Another is expected at year’s end. With plans to expand the current base in Inagua, as well as construct a new base in Ragged Island, along with the acquisition of detection and tracking technologies, the Defence Force is well on its way to decentralizing its operations.

Photo one shows: The radar atop the tower in Matthew Town Inagua. The $2.1 million state of the art Kelvin Hughes Long Range Coastal Radar, which was made available to The Bahamas by the government of the United States of America through the US embassy in The Bahamas, will be used in the fight against illicit activities.

Photo two shows: Prime Minister The Most Honorable Hubert Minnis preparing to unveil a plaque to commemorate the official handing over of a $2.1 million Long Range Coastal Radar Bahamas by the government of the United States of America through the US embassy in The Bahamas at Matthew Town, Inagua.
Shown from left: The Honourable Marvin Dames; Prime Minister Hubert Minnis; Chargé d’Affairs, Ms. Stephanie Bowers, at the United States Embassy in Nassau; General Terrance O’Shaughnessy, Commander of the United States North American Aerospace Defence Command; and the Commander Defence Force, Commodore Tellis Bethel.