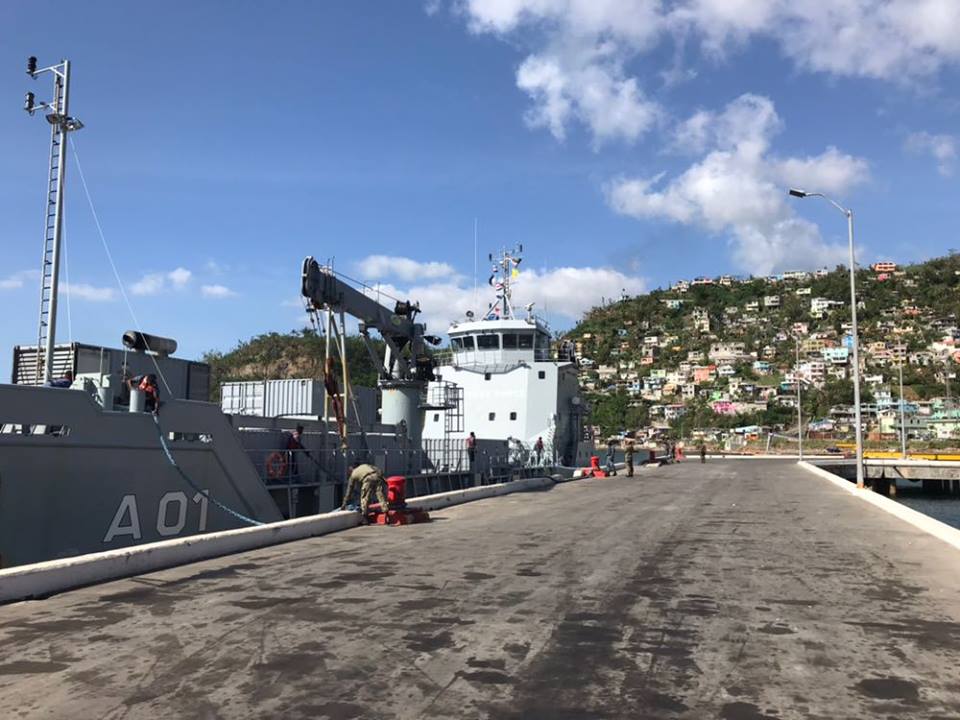 A relatively smooth journey brought HMBS LAWRENCE MAJOR safely to the hilly shores of Dominica from Jamaica, shortly after noon today. It was easy to imagine the beauty and appeal the island nation conjured as a tourist hotspot, before its hurricane experience. The first hand viewing of the wide spread damage helped the officers and crew of the Bahamian military vessel, understand exactly why their mission is so important.

The HMBS Lawrence Major arrived at Roseau, the capital of the Commonwealth of Dominica, where it was met by the National Disaster Coordinator, Mr. Fitzroy Pascal and the Officer In Charge of Security at the Port for Disaster Relief Operation, Lieutenant Colonel Kester Weeks of the Trinidad and Tobago Defence Force, along with other officials.

Commanding Officer of the vessel, Lieutenant Commander Milton Munroe said, “This is indeed a great and historic experience for my ship’s company to sail the first Bahamian military vessel to the Lesser Antilles. The passage was long and the ship was challenged by several days of heavy weather early on in our voyage. We are committed to providing assistance and relief to the people of this Commonwealth … on behalf of the Government and people of The Bahamas.”

During a brief departure ceremony at Coral Harbour Base almost 10 days ago, the Minister of National Security, the Honourable Marvin Dames stated that Prime Minister of the Commonwealth of The Bahamas, Dr. the Hon. Hubert Minnis was committed to the recovery efforts of Dominica and as such had promised the delivery of relief supplies to the Caribbean Island via a Royal Bahamas Defence Force vessel.”

Commodore Tellis Bethel, the Commander Defence Force, said he has complete confidence in the ability of the LCDR Munroe, his 40 Officers and Marines, and the 4 firefighters from the Police Fire Services to contribute positively to the relief efforts being carried out in Dominica by partner forces and agencies.

LCDR Munroe will pay courtesy calls on various Government Officials during the upcoming week. The ship will also offload and turn over cargo received from The Bahamas National Disaster Emergency Management Agency, as well as from the Jamaican government authorities to the National Disaster Coordinator in Dominica.

In the days ahead, the RBDF’s Technical team will integrate with those Caribbean forces already on the ground affecting repairs to the prison and other government buildings. LCDR Munroe shared that “there is a great need for our carpenters in the task force. The Mobile Containerized Unit will be set up and the galley (kitchen) will be functional. We also have 2 extra medics on stand by to assist the 5 Bahamian doctors that will be coming. Our task is to facilitate and provide support and reinforcement as required.” #operationmobilization
Photos by Marine Seamen Michael Turner and Frederick Russell