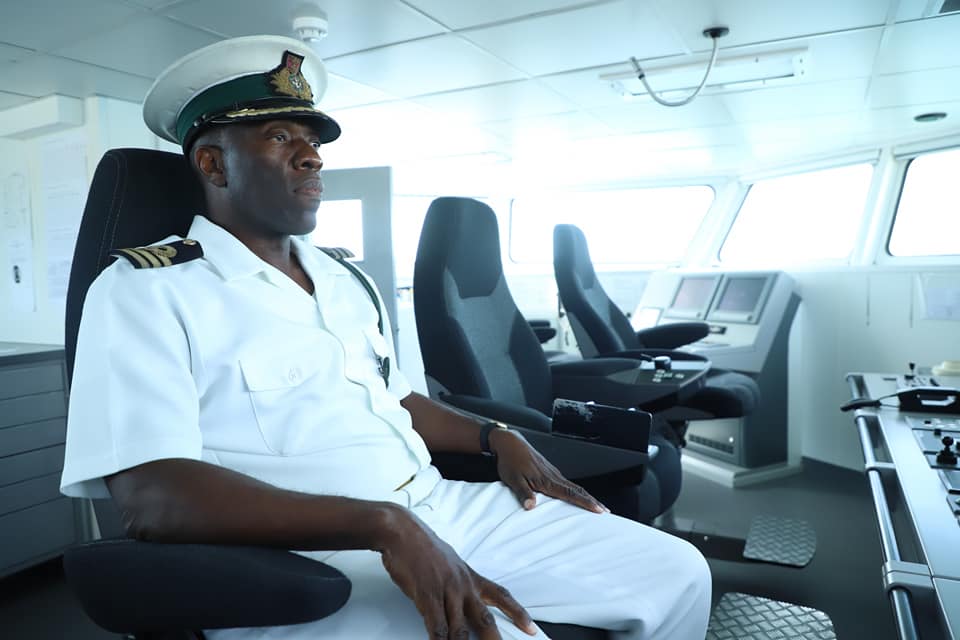 Today, we highlight an individual who has made a tremendous impact as a Commissioned Officer in the Royal Bahamas Defence Force.

Senior Commander Gregory Brown has given over 35 years off service to his country, and by extension, the Royal to the Royal Bahamas Defence Force, with approximately twenty-nine (29) of those years with the Squadron Department in various billets including Commanding Officer of various craft.

After enlisting as a Marine Recruit in 1985, he was selected to attend the Midshipman Course at the Britannia Royal Naval College, England in 1986. Since then, he has subsequently attended additional professional and development courses which includes the Patrol Craft Commanders Course in Panama, South America; Perspective Commanding Officer/Executive Officer Course in the USA; Naval Staff Course in the USA; and the Advance Management Course, at the International Law Enforcement Academy.

Throughout his military career, Senior Commander Brown has the opportunity to travel to numerous countries in Europe such as Amsterdam, Netherland, Brussels, Belgium, Paris, France and Dusseldorf Germany. In 2018 as the Commanding Officer of HMBS Bahamas, he, along with his crew a small team of advisors from the Damen Company sailed from the Netherland to The Bahamas following a refit of the vessel. They had the opportunity to visit places like Funchal Madiera of the Northwest Coast of Africa, and Cape Verde off the West Coast of Africa.

Regionally, Senior Commander Brown sailed to Santo Domingo in the Dominican Republic and Port Royal in Jamaica, during the Annual Trade Winds Exercise. He has also sailed to Port-au-Prince Haiti numerous times for repatriation exercises, and was also given the opportunity to fly to Belize, Trinidad and Panama to attend conference and development courses.

Before joining the Defence Force, Senior Commander Brown was compelled to make a difference for his country.

“It was a young organization at that time in 1985”, said Commander Brown. “I felt the organization would present good opportunities for training and advancement, and would have had the opportunity to patrol and protect the borders of the Bahamas against Drug Smuggling, Poaching and Illegal Migration; which at that time were of particular interest”

Forward 35 year later, the dedicated Officer from Colonel Hill, Crooked Island who describes himself as quiet and reserved is certainly leaving a great impact on the organization that is touted as being “the best little navy in the region”. The husband of Demethera Nee Williams and the father of 2 children, his past-time hobbies include Fitness, Track & Field, (RBDF 100M & 200M Champion), and listening to music.

When asked of some of his memorable voyages, he highlighted travelling across the Atlantic Ocean from Europe to the Americas three (3) times; the first time aboard his training ship “HMS FIFE” in 1986 as a midshipman and the other two (2) times as a Commander onboard our the 60-meter Bahama Class patrol craft.

Brown has no regrets on his decision to joining a young and vibrant organization. He leaves this final word of advice for the younger generation:

“I had the opportunity to interview some potential recruits and was shock to find out a lot them did not even fill the application form out, their parents did”. Said Commander Brown. “I asked why he or she was interested in joining the Force and a lot of them replied that their parents wanted them to join. So, I would advise Marines currently serving to make the Force a career not a job; because the opportunities are there for training and advancement. On the other hand, the demand for deployment to the various Sub-bases and the requirement to patrol can take its toll especially on a young married Marine. Some Marines are finding excuses why they cannot be deployed or patrol because there is no one to take care of their children; to those ones I would say pack your bag and go home because the Force is not for you”.