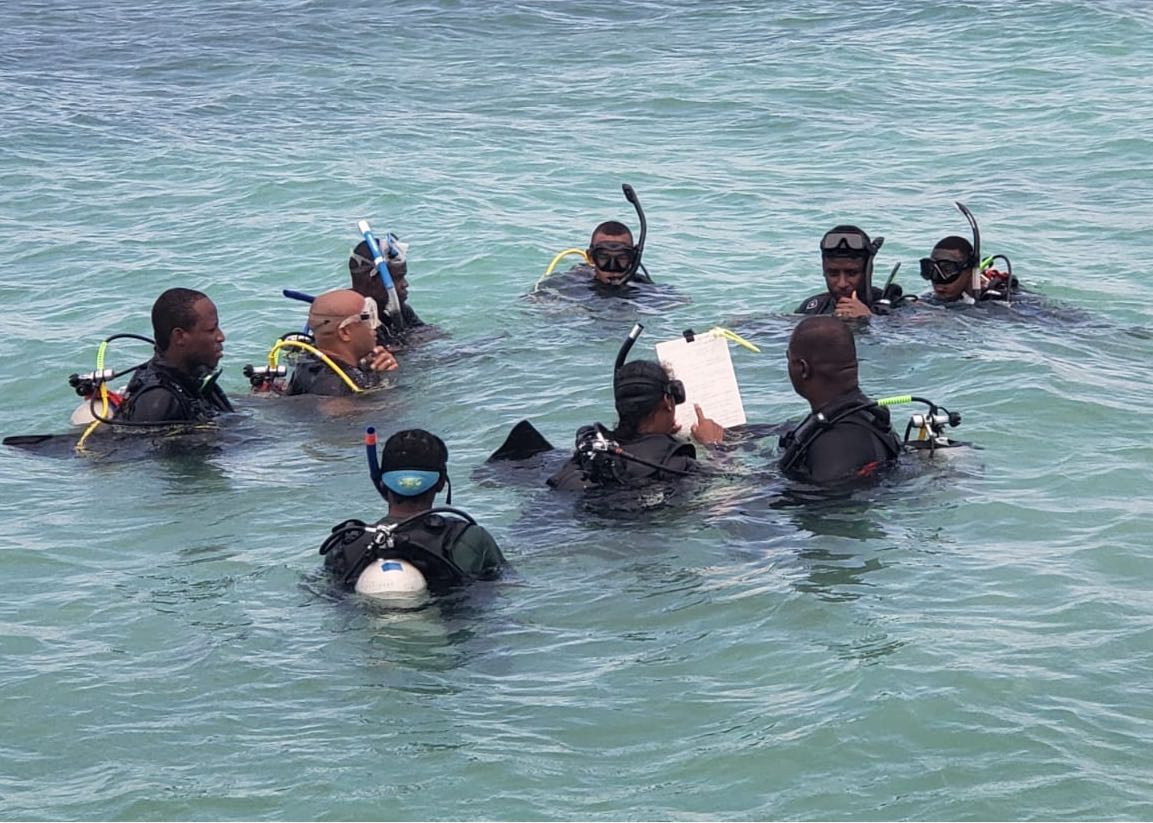 Nine marines from the Royal Bahamas Defence Force (RBDF) recently completed six months of intensive dive operations to join the ranks of RBDF Divemasters under the Professional Association of Diving Instructors (PADI) program.
Headed by PADI Certified Staff Instructor, Chief Petty Officer Thomas Williams, the course commenced in February 2018 and was completed on 14th August. As a result of successfully completing this level of dive training, the RBDF participants are now listed among qualified leaders in the dive world. Combined with military training, their level of expertise qualifies them to assist or supervise major dive operations.
Before attaining the level of a Divemaster, participants needed to complete a number of courses including the Open Water, Advanced Open Water, Emergency First Responder and the Rescue Diver courses. The training also includes being proficient in First Aid procedures and the use of the Automated External Defibrillator (AED). The nine Marines have all exceeded these levels, with the next step being the Open Water Scuba Instructor Course.
Chief Instructor Chief Petty Officer Williams encourages other young marines to become involved in diving to enhance the Force’s capacity.
“With the Defence Force being a sea-going force, we are also called upon to perform duties which require dive operations”, said Williams.
Approximately two weeks ago on August 16, RBDF military divers were called on to rescue a father and his daughter from drowning after their jet ski capsized near Potters Cay Dock in Nassau Harbour. The divers also assisted with retrieving a body from nearby waters in a separate incident on the same day. Prior to this, RBDF military divers assisted with search and recovery efforts after a light aircraft had crashed in waters off the east coast of North Andros in January of this year.
The Royal Bahamas Defence Force currently boasts approximately 90 military divers, with 11 of them achieving the Divemaster status, including the first two female divers, Able Women Marines Aniska Bonaby and Jamie Cleare.
The Marines who successfully completed the recent Divemaster course were Leading Seamen Omar Albury and Quincy King, Able Seamen Enoch Smith, Jason Bethel, Drissen Brennen, Renard Hall, Letario Darling and Able Women Marines Aniska Bonaby and Jamie Cleare.
The Royal Bahamas Defence Force remains steadfast in Guarding Our Heritage as the organization continues to invest in the professional development of its Officers and Marines.