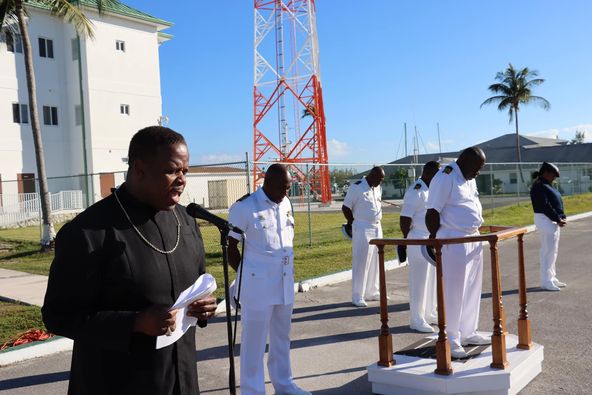 In keeping with the Commander Defence Force’s intent as it pertains to the well-being of RBDF personnel, members of the Royal Bahamas Defence Force were ministered to by Bishop Willie Thorton from Detroit Michigan during his visit to HMBS Coral Harbor Base this morning. In his address, Bishop Thorton offered prayers and words of insight for service members and executive leaders of the force as he challenged them to remain committed, true, and steadfast to the word of God, as they carry out their daily missions.Also in attendance was Captain Coral Harbour, Captain Glenn Mcphee, Force Chaplain, Apostle Raymond Wells and members of the RBDF Welfare Department.As the Royal Bahamas Defence Force continues to protect the territorial sovereignty of the Commonwealth of The Bahamas, the morale and welfare of its Officers and Marines remains a priority.(