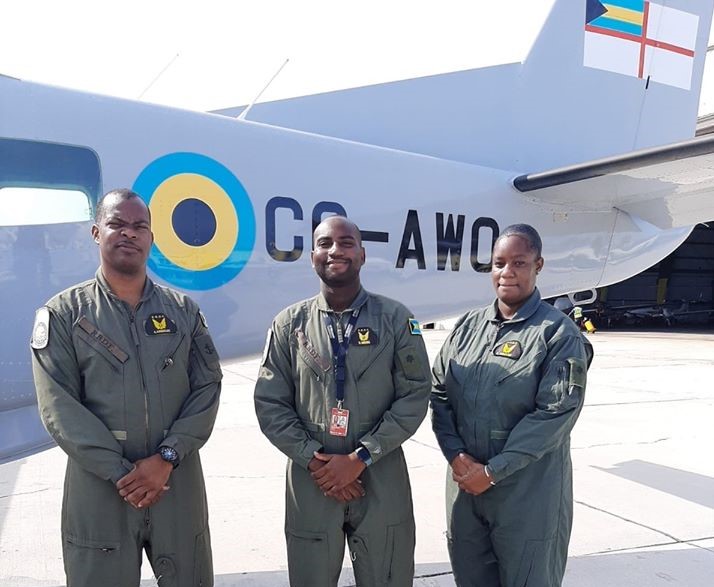 Coral Harbour Base, 27 JUNE ‘20 (RBDF): Leading Mechanic Delron Mitchell of the Royal Bahamas Defence Force recently made history by becoming the first Able Rate in Command of an RBDF aircraft.

On May 19, 2020, the 11-year-veteran piloted the force’s Cessna Caravan, accompanied by the Air Wing flight crew consisting of Leading Mechanic Andrew Adderley and Able Woman Marine Kennelis Gibson. During the COVID-19 pandemic which called for the restrictions of flight, the team was called upon to make an operational flight into Governor’s Harbour, Eleuthera.

Mitchell has since been advanced to the rate of Leading Hand following the force’s recent promotional exercise.

Leading Mechanic Mitchell has been with the Air Wing Department for 4 years. Prior to this, he has served in the Engineering, Squadron and Administration Departments of the force. In 2015, he attained his Private Pilot Single Engine license, and in 2019 he earned his Commercial Pilot Single Engine and Multi-Engine license. In preparation for flying the RBDF aircraft, He attended the Cesna Caravan G-1000 Initial Training IFR course in Wichita Kansas in February 2020.

According to Commander Reno Major, Commanding Officer of the Air Wing Department, Leading Mechanic Mitchell has proven to be an asset since being assigned there.

“Leading Mechanic Mitchell was first introduced into the Airwing Department as an air-condition technician, but he now serves as Pilot in command of the same aircraft that he once serviced”, said Commander Major. “He has a high level of concern in attitude towards self-improvement and empowerment, and an outstanding sense of duty which he has taken full advantage of, along with the supervisory assistance and opportunities provided”.

The Air Wing section was organized in 1981, with the Defence Force Base being utilized as its staging area for the operational, administrative and logistical activities. The Air Wing department has since expanded to its present site at the Windsor Field, and the Officers and Marines have conducted numerous flights ranging from reconnaissance and surveillance flights, troop/personnel/cargo transport, VIP transport flights, search and rescue missions, and medical evacuation operations.