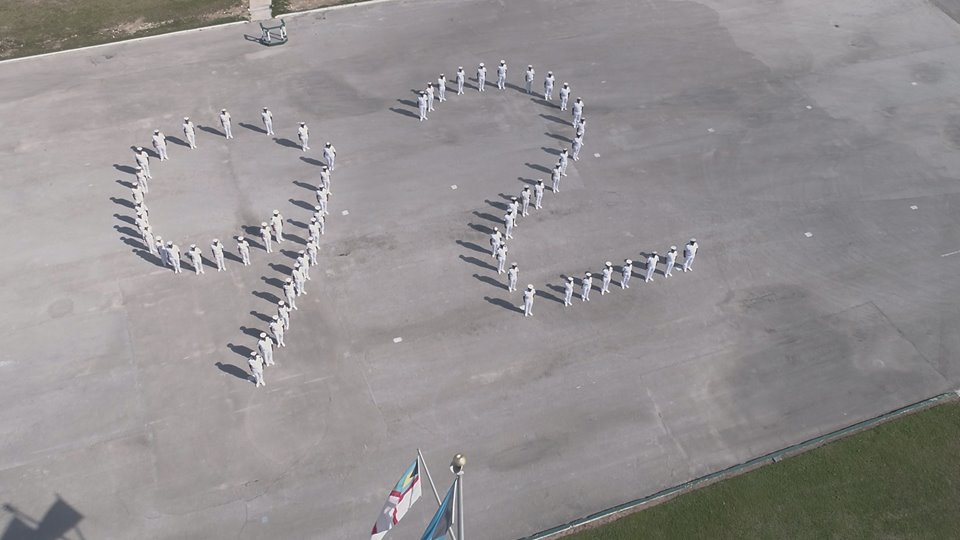 Coral Harbour Base, 19 FEB. ‘19 (RBDF): With the air of a salute befitting royalty, members of the Royal Bahamas Defence Force are paying special tribute to Sir Sidney Poitier in recognition of his ninety-second birthday on Wednesday 20 February 2019 with a unique video collaboration that was released earlier tonight via mainstream and social media.

Through this production of love, members of the Defence Force–The Bahamas’ military service–salute the life and living legacy of a great Bahamian-American, celebrated actor, film director, author and diplomat.

The video production is set to the theme song of the British film bearing the same title, To Sir With Love, in which Sir Sidney played the leading role. The song was also released the same year as the film in 1967, and was sung by Scottish singer and actress, Lulu Kennedy-Cairns. A recipient of the Officer of the Order of the British Empire (OBE) award, Lulu starred alongside Sir Sidney in the movie. The song and movie became a number 1 hit that year on US charts.

Distributed by Columbia Pictures, the film featured Sir Sidney as a black educator from British Guiana (now Republic of Guyana), who took a teaching job at a high school in the rough East End district of London. At the school, the students addressed their teacher as, ‘Sir,’ almost a decade before Sir Sidney was actually knighted by the Queen of England.

Against great odds, ‘Sir’ was able to impart a sense of dignity, and social responsibility to a class of defiant, rebellious teenagers. In the end, the students came to love and respect him for the time and effort invested in transforming their lives for the better.

Sir Sidney was born ninety-two years ago on 20th February 1927. Back then, The Bahamas was a British colony before gaining independence in 1973. His parents were farmers in Cat Island–an island in central Bahamas famed for storytelling, rake-n-scrape music and quadrille dancing that was once featured at the Smithsonian Institution in Washington, DC.

The 48-mile long Island also boasts The Bahamas’ highest hill, Mount Alvernia (also known as Como Hill), near central Cat Island with a height of 206 feet. Though low in comparison to the mountains of California, Mt. Alvernia foreshadowed the summit Sir Sidney was to climb in the film making industry.

Sir Sidney’s birth, however, took place in Miami, Florida–180 miles northwest of New Providence–during an overseas visit by his mother. He grew up in both Cat Island and the island of the nation’s capital (Nassau), New Providence Island, and spent his later teenage and adult years in the US, primarily Miami and New York. Both Sir Sidney and his wife, Canadian-American actress, Lady Joanna (née Shimkus), now live in California.

His passion for acting earned him an almost immediate reputation in the film industry, where he earned the distinction of being the first black person to garner the American Academy and Golden Globe Awards for Best Actor in 1964. Many prestigious awards have followed, including the American Presidential Freedom Award.

Other notable achievements by Sir Sidney include being awarded Knight Commander of the Most Excellent Order of the British Empire (KBE) by Queen Elizabeth II in 1974, and serving as the Ambassador of The Bahamas to Japan from 1997-2007. He had also served for a short time in the United States Army during World War II in 1943.

Sir Sidney’s heritage is that of one whose lifeblood was drawn from Bahamian land and sea–a place that gave birth to the modern nations of the Americas following Christopher Columbus’ first landfall in the New World in 1492 on an island of The Bahamas, which some claim to be Cat Island.

As guardians of this rich heritage and with their motto as, ‘Guard Our Heritage,’ it seems fitting that the very Officers and Marines, who preserve and protect the native shores of this tropical paradise saw fit to honor one of their nation’s own shining stars with a touching tribute.

The tribute is in three formats: a music video production that was released for television earlier tonight; instrumental music for easy listening on the radio; and vocals for personal enjoyment. The instrumental and vocals will be released on Thursday 21 February, 2019.

To Sir With Love was originally written by Don Black and arranged by Mike Leander with music by Mark London. The Defence Force version was composed with a Bahamian flair by Sub Lieutenant Kevin Toote, a seagoing officer and musician, and sung by Able Woman Marine Ebony Gibson, a member of the Defence Force Band.

Music for the video and radio was performed by the Defence Force Band and directed by Chief Petty Officer Matthew Rolle. The production also features native rake-n-scrape and Junkanoo music.

Technical support and coordination of activities at film locations were provided by The Bahamas Ministry of Tourism, Reel Time Studio, The Bahamas Bridge Authority, the Royal Bahamas Police Force (Paradise Island Police Station), and volunteers of the Roots Junkanoo group.

To Sir With Love